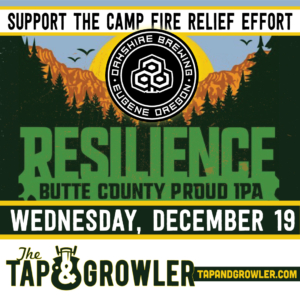 In response to Camp Fire relief efforts, Sierra Nevada brewed Resilience Butte County Proud IPA. They released Resilience on Giving Tuesday, November 27 and are donating 100 percent of the beer sales to the Camp Fire Relief Fund. In addition, they have also asked every brewer in America to brew Resilience and do the same.

They sent a letter to brewers across the country, inviting them to join in this effort. They are working with malt, hop and yeast suppliers to provide raw ingredient donations to all participating breweries and are asking those breweries to donate 100 percent of their sales to the fund, as well.

“We know that the rebuilding process will take time, but we’re in this for the long haul. Our hope is to get Resilience IPA in taprooms all over the country to create a solid start for our community’s future.” … more

Oakshire Brewing jumped on this opportunity and has generously donated one keg to each of our locations: beergarden, Tap and Growler & PublicHouse. Each of our pubs will donate 100% of the proceeds to the Camp Fire relief effort.  Come and support our neighbors in California with a pint of Oakshire’s Resilience Butte County Proud IPA on the following dates: